What You Need to Save to Reach $1M

There is something magical about one million dollars. A lot of people seem to view it as the line between rich and not rich. I don’t buy that as I’ve seen plenty of people with less than seven digits who are personally and financially wealthy, and I’ve seen plenty of people with seven digits or more who are personally “starving” and somehow still feel financially poor. Now that I have car payments and house payments and see taxes and health insurance expenses deducted from my paycheck, I can also see how, over time, someone could go through a million dollars. I think it’s the act of having to use a second comma to write out "$1,000,000” that makes it such a big deal.

I don’t know whether you’re trying to become a millionaire or not. I don’t know whether you’re going to have a pension, what your Social Security may or may not look like, or what type of lifestyle you are looking to sustain in retirement, so I can’t really tell you that a million dollars will even be enough for you. Besides, who knows what taxes will look like when you are ready to retire? Who knows what inflation will be between now and then? What I can tell you is that saving and investing is important, and that saving and investing sooner rather than later can have a critical impact on your future outlook.

Below, please take a look at a graph showing how much you would need to save per year, based on when you start saving (assuming a flat, six percent annual rate of return), to reach one million dollars by age 65. 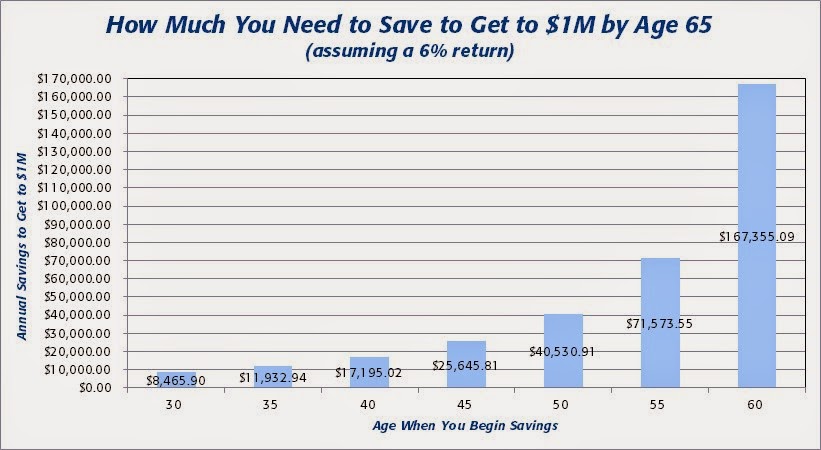 For me personally, all of these annual savings figures represent a significant amount of money, but some of them look a lot more feasible than others. If you start saving early by living below or at least within your means, you save diligently paycheck after paycheck, and you have a little bit of luck and good fortune, I think most people should have a shot at saving up a lot of money for retirement - maybe even a million bucks! That being said, if someone keeps buying the latest gadget or accessory, living paycheck to paycheck, and carrying on like there is no tomorrow, starting to save at age 55 or so is not going to be a lot of fun, and more frighteningly, it might not even do that much good.

In short, no matter how old you are or how much you can save, I’d suggest you start saving now! In the words of the hit novel and movie franchise The Hunger Games, by saving now, the odds will be ever in your favor.