Throughout the course of my blog, I have frequently suggested that you take the time to gather some data and take a good, hard look at the sources of your living expenses. The results of such an exercise might be shocking, concerning, enlightening, comforting, or something in-between. Whatever the results, today I thought we’d practice this exercise together as we take a look at my uncle’s living expenses.

Looking at the chart below, you can see that my uncle spends a significant amount of his money in several categories. Now all these numbers are rough, but it looks like around 21% goes to medical expenses, 20% goes toward paying off a note payable (he owes some people some money they gave him a long time ago), and 20% goes toward his security system. I can’t believe more than 60% of his expenses are allocated just to those three categories! Continuing on, I can see that he has some sort of debt, since he spends 6% of his total yearly expenses on interest payments. He also gives around 13% to charities or to people less fortunate than he is, so I guess that’s nice. He’s only spending 3% of his total expenditures on transportation, and only 2% on education. That seems a little low to me, but what do I know? Finally, I guess the other 15% is all meshed together into other, smaller categories of living expenses. 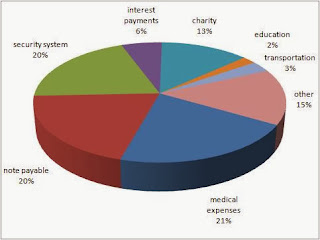 Now be nice to my uncle because I really do think he means well, but I also think he could benefit from looking at the sources of his living expenses as a whole a little more often. When I break down someone's living expenses like this I try to help them figure out where their money is going if they aren’t sure, I try to help them figure out where they can cut back if they need to cut back, and I try to figure out ways to improve their overall financial standing by addressing specific expense categories such as my uncle’s interest payments. As you might imagine, this process can be personal and painful, but it can also be eye-opening.

By now, I hope you know I would never share my uncle’s financial information with you or anyone else I am not authorized to speak with. After all, always keeping my clients’ personal and financial information strictly confidential is part of my job. That being said, I was able to share the details of my uncle’s expenditures with you today because you’re related to him, too, and his expenses are a matter of public record. In other words, he’s my uncle, he's your uncle - he’s our Uncle Sam!

I don’t want to wade into the ballyhooing of politics, but I do think some of you might find the pie graph above a little more interesting now that you know it was from a CNN report covering the United States government’s 2011 fiscal year. Switch out my uncle’s “medical expenses” for Medicare, Medicaid, and some children’s health insurance programs, my uncle’s “note payable” for Social Security, my uncle's "security system" for defense spending and international assistance, and my uncle's "charity" for safety net programs, and our government’s living expense picture should become a little more clear. It could just be me, but I imagine clamoring for more military spending or more health insurance versus spending more on education, for example, might give people pause when they look at the government’s federal budget as a whole, and keep them from getting so caught up in an impassioned speech or a fiery, late afternoon news show.

You may have caught on to my ploy from the very beginning, but I hope some of you are a little surprised and maybe even flabbergasted. Sure, take a look at Uncle Sam’s spending and reflect quietly on the sources of expenditures for our country if you’ve never done that before, but let me reiterate that the main purpose of this post was to demonstrate to you the true value and potential impact that looking at your living expenses as whole can offer.

I don’t claim to always have the answers for your budget, and certainly not Uncle Sam’s, but if you take the time to figure out the sources of your living expenses and look at their relative percentages, I bet we could get off to a really good start!

Over the last two years, a number of people have asked me to devote a blog post to engagement rings. As you know, I’m happy trying to help with any financial question, but to be honest, I’ve always shied away from this request. I’ve known what I wanted to write for a while, but I’ve been hesitant to put pen to paper because I have friends and family members with all sorts of different rings and rocks, and I didn’t want to make anyone mad with any of my candor. Well last weekend, my wife told me she could hear something when she shook her left hand, and when we took a close look, we quickly realized her ring’s center stone was loose! If that’s not a sign, I don’t know what is. It’s time to talk diamond rings.

I have a couple of thoughts to share, but I know what you really want to know: How much should you spend on an engagement ring? Some people and jewelers will tell you two months’ salary. Some will tell you three months’ salary. I’d tell you it depends. It depends on the girl’s style and her expectations if you’ve talked about it together. It depends on your salary and whether you are a corporate lawyer or an animal balloon maker. It depends on what you (and your bride-to-be) can afford after you consider any upcoming housing needs, wedding expenses, and honeymoon expenses, in addition to the financial pressure of any other debt you may already be facing. The average diamond engagement ring costs between $3,500 and $5,000 depending on which study you go with, but personally, I think that statistic is meaningless. I know plenty of girls with engagement rings that were below-average in cost who have, as best I can tell, above-average marriages. I also know plenty of people with above-average cost engagement rings who have below-average or even failed marriages. I’m not trying to step on any toes, but I am pretty convinced that the color, cut, clarity, and carat size of the diamond ring you decide to go with shouldn’t influence the answer to the popped question. If it does, Houston, you’ve got a problem, and it’s probably not the ring.

You should also consider the ring’s future costs when choosing a jeweler. Does your jeweler have a warranty or a lifetime guarantee on your purchase? Is maintenance, polishing, re-sizing, and re-dipping (if you have white gold) covered? How much does it cost to, let's say, re-tighten a center stone? All of these things are worth considering, and you should ask your jeweler about them before you become married to a particular ring. I know these considerations may not be enough to change your selection, but if it’s a tie between a jeweler with great customer service and a lifetime guarantee and a jeweler who’s going to charge you every time you and your bride come in, you can probably guess who I’d recommend you go with.

Finally, you may think I’m crazy, but I would strongly suggest adding a small rider on your renter’s or homeowner’s insurance policy specifically covering your engagement ring and any other valuable jewelry you may have. I say this because I know people who have had to dive into pools to recover a lost ring or even secretly replace a lost ring. I even know one person who decided to go through a Porta-John to retrieve an engagement ring that was lost at a most inconvenient time. Seriously though, for a small amount per year, you can have the added security of knowing that if your diamond ring is stolen (or with some policy coverages, lost) it can be replaced without you having to fork out a hefty, unexpected amount of cash. My wife and I were both unhappy that her center stone had become a little loose, but my reaction was much calmer knowing we had the proper insurance in place for one of our most valuable and sentimental possessions.

Remember when you were a kid and you’d wake up on Christmas morning and excitedly run down the stairs or hallway to see what Santa Claus had left behind? Think about the excitement you felt the year you got that long-awaited and coveted basketball goal, dollhouse, or bicycle. Don’t get me wrong, I do believe it is more blessed to give than receive, but let’s be honest; there is probably at least one occasion you can think of where you received a gift that was pretty, epically awesome.

Fast forward to now. Batman and Teenage Mutant Ninja Turtle figurines don’t quite mean to me what they used to, and for me at least, I’ve seriously got enough clothes. I’m still genuinely appreciative and always happy with any gift I receive for any occasion (well, most of the time…), but somehow, receiving presents usually isn’t quite the same as it was when I was a kid. Occasionally though, a moment like those times from childhood Christmases and birthdays of yesteryear repeats, and a glorious gift breaks through. Based on some recent conversations I’ve had with a few friends and co-workers, I’ve concluded that glorious, break-through gifts don’t have to be expensive, and quite frequently, are less expensive than standard gifts. What if on the next occasion you gave…

In my book, there are two kinds of gifts: good gifts and nice intentions. Gifts also have two costs: expensive and practical. If it’s a big anniversary, a birthday that ends in “0,” or you truly have one of those rare, “perfect” gift ideas, I say go for it as long as it won’t inhibit next month’s mortgage payment. If it’s just another overpriced item that has her favorite label on it, a golf club that will still, somehow hit all golf balls to the right, or a pair of argyle socks, I say you can do better. Some of the above gifts have actually worked well for me and people I know whether we were the givers or the recipients. The next time you are struggling to cook up a good gift idea for a friend or family member, I hope you’ll think of this list. At best, they will be glorious, break-through gifts; at worst, they will be prudent presents.
-Tom
Posted by Tom at 9:59 AM 1 comment: