There I was at the starting line of the famous Peachtree Road Race. I was finally old enough to be a part of the 4th of July tradition I’d watched my dad do every year of my life. I was stoked. I was a soccer player and I ran after the ball for a full hour without stopping every Tuesday, Thursday, and Saturday, so this so called “10-k” was going to be a piece of cake! When our wave started, I took off. My dad stayed with me for the first bit and then he started telling me we needed to slow down to save some of our energy for the finish. What did he know? Besides, a few runners were actually passing us! I think that first mile may have been my only career eight minute mile, but boy, by the fifth mile of the race, twelve-year-old Tom knew his dad was right.

I like to think I was a pretty cool guy in high school. In some ways I was. In some ways I was probably not. Being an avid ultimate Frisbee player with some of my band buddies was probably not my coolest hour, but we sure did have fun. We were good, too. So good that word travelled and some friends on the cross country team challenged us to a game one Saturday. Cross country whatever! I was in great shape! For a solid week my band friends and I went over and over how bad we were going to destroy our cross country friends. I think that was the last day I enjoyed running…

Of course there was that accounting test my junior year in college. I was tired. I wanted to do something other than study. Besides, I had things under control. I usually did well on tests. My scholarly roommate and fellow accounting major urged me to go over that small little bit the professor glossed over about a couple of terrible things called deferred tax assets and deferred tax liabilities. I actually remember saying, “If he asks me about that on the exam, he can have it!” I cannot tell you how much I ate those words. Literally, my roommate waited for me to look up and make eye contact across the room so he could give me that told you so look. Yes, yes he did.

I think overconfidence is a pretty natural thing. I think that people tend to value their own judgments and opinions over those of others, even if other people are “experts.” Think home projects, grilling, sports, parenting, politics, etc. In the investment management world I believe this is why many investors have a little trouble letting someone else professionally manage their portfolio. They value their own judgments and opinions, they want to be in control, and they want to see action in their portfolios. This leads to many "do-it-yourselfers" trading more in their portfolios than I would typically recommend, and that usually means more trading fees and expenses, more taxes, and a lower investment return over the long-term. Consider this chart presented by Saturna Capital that assumes a 7% annual return for ten years and a 23.8% tax rate: 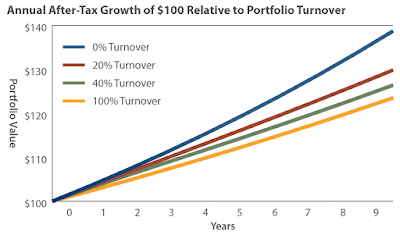 Lower turnover (aka less trading) typically means higher portfolio values. Be an investor, not a trader!

Finally, I wanted to share an interesting study that I came upon done in 2001 by the Quarterly Journal of Economics. They studied portfolio turnover and the investments of male and female households and they found that single men trade the most, married men trade second most, married women trade the third most, and single women trade the least. Guys, based on what we learned from the chart above, I think that means the women are right again!

If you enjoy investing and you like the rush of trading, I encourage you to carve away a small portion of your assets and make it a hobby. It’s one thing to open a box with a zillion pieces, not completely read the instructions, watch a video online, and tell your wife you’ve got it under control - maybe you do, maybe you don’t. It’s another to be overconfident when it comes to your family’s nest egg!