Don't Mix Politics With Your Portfolio!

In light of my trying to convince you that you shouldn’t let your side of the political aisle drive your investment philosophy, I did some research. Below, please find a graph illustrating my findings. On the vertical axis, you will see the cumulative returns of the Dow Jones Industrial Average (DJIA) during each presidential administration since 1901. On the horizontal axis, you will see C-SPAN’s 2017 presidential rankings of each presidential administration since 1901. These rankings are based on historians considering things like public persuasion, crisis leadership, economic management, international relations, pursuing equal justice for all, and performance within the context of the times. 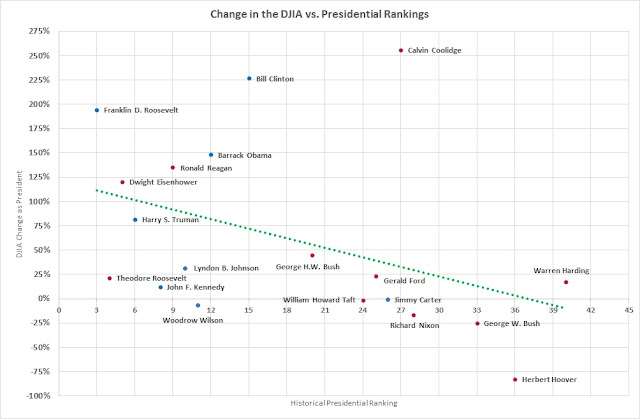 What do you think?

Do you like the stock market returns during the time of Calvin Coolidge? With apologies to President Coolidge, do you remember any of his accomplishments (he lowered the national debt and cut taxes)?

Theodore Roosevelt, John F. Kennedy, and Woodrow Wilson were three of our most beloved presidents. Teddy Roosevelt was a “Rough Rider,” he stood up to monopolies, he facilitated the construction of the Panama Canal, and he had an awesome mustache! JFK was a decorated Naval hero, he cut taxes, he worked towards civil rights for African Americans, he was responsible for the Equal Pay Act, and he didn’t blink during the Cuban Missile Crisis. Woodrow Wilson led the United States to victory in the First World War, he created the Federal Trade Commission, he helped secure women the right to vote, and he established the eight-hour workday with additional pay for overtime. Do you find yourself wishing that one of these presidents was back at the helm, or do you find yourself wishing for better stock market returns?

When I look at this chart, I see two trends. First, Democratic presidents over the past 116 years tend to be highly ranked. Second, as the trend line shows, presidents who presided over periods of significant stock market growth tend to be remembered fondly and highly ranked. Now we could discuss whether significant stock market growth during an administration is due to a president’s policies, their predecessor’s policies, or just the luck of the draw, but that is for another day and another setting.

I don’t place wagers on sporting events for a lot of reasons. One of those reasons is that I was born and raised in metro Atlanta, so I unfortunately have a pretty good idea about how my local teams are going to do in big games. Another reason is that despite my fun superstitions and routines, I have come to accept that there is no real relationship between the love I have for my team and their performance. It’s one thing to bet $100 on the Braves, Falcons, or Bulldogs, but it’s an entirely different thing to bet your nest egg on your politics!

They say you shouldn’t mix business with pleasure. It would also be my counsel not to mix your politics with your portfolio!