Extra! Extra! Read All About It?

I don’t know about you, but I prefer my sports teams winning versus losing, sunshine to rain, and the stock market trending upward as opposed to trending downward. I’m not sure the media does. Think about the coverage surrounding Mark Richt’s exit from UGA, the Braves’ rebuilding and relocating, and the Falcons’ collapse after starting 5-0. Think about the coverage every time we have tornadoes or, better yet, every time we might see a snowflake. Think about the coverage when the stock market is down a few hundred points in one trading day. There is so much more “breaking” news, so many more news alerts, smart phone notifications, and headlines that are shared when the news is bad. After one of the most volatile and negative months investors have experienced in several years, I’d like to ask you to briefly turn over your phone, mute your television, silence your radio, and turn off your computer for just a few minutes and look at the last ten bear markets with me.

A bear market is defined as a drop of at least 20% from the most recent market high. Below, is a pretty fascinating chart put together by J.P. Morgan showing the characteristics of the last ten bear markets (click on it). 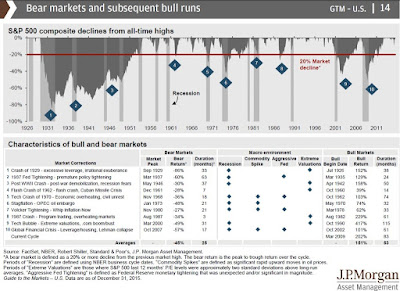 Folks, the S&P 500 was down about 5% in January and I’ve seen a whole host of headlines using phrases like “market crashes,” “market plummets,” and “investors robbed.” A catchy title or headline is obviously and purposefully trying to get you to buy a paper, watch the news show, or click a link, but I think it’s important to keep things in perspective.

On the right side of J.P. Morgan’s chart you may have also noticed some data on the bull markets or market recoveries. Markets roared back after the Great Depression, the Cold War, the inflation of the 70s, the Federal Reserve intervention in the 80s, the bursting of the tech bubble, and the Great Recession. On average, the last ten bear markets have been around a 45% pullback while the last eleven bull markets have been around a 151% pop!

Don’t get me wrong, I am concerned about a lot of things going on in the world, and I would not be surprised if market volatility continued. Inevitably, at some point, there is going to be another entry on the “bear side” of J.P. Morgan’s chart. Of course history also seems to offer there will then be another entry on the “bull side” of J.P. Morgan’s chart…

What am I telling people to do? The same things I’m always telling people to do! Make sure you have enough cash set aside to feel comfortable and for any large, upcoming expenses. Make sure that your portfolio is prudently diversified for your risk tolerance and age and stage in life. As hard as it is to accept, volatility is the friend of the long-term investor. The thing is, you have to stay buckled in during the down times in order to fully participate in the up times.

At the rate many media outlets are going, I really don’t know what phrases and terms they will use when we have our next bear market. I don’t know how far they’ll go to try and convince everyone that this time is different. I’ll continue to vigilantly monitor the markets, but don’t expect me to get caught up in some headline. I’m much more interested in focusing on the cataclysmic stinkage of my sports teams and the next allegedly imminent blizzard!