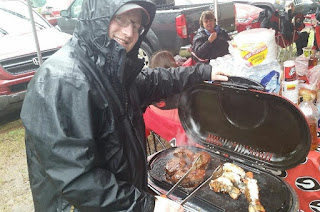 The second tendency that I would suggest many normal investors have would be the tendency to overreact and underreact. (If you missed out on the first part of my behavioral finance series on five of the characteristics most “normal” investors seem to have, you can catch up right here!) Of course, before I dive into how investors can, and often do, overreact, I must consider my own behavior this past weekend…

As many of you know, my wife and I are fairly avid UGA fans. Fine, fine, we’re full-fledged Georgia Bulldog fanatics! I mean I got up at 3:30 a.m., left my home at 4:00 a.m., and arrived in Athens at 5:38 a.m. to claim a small piece of generally lucky land between two curbs that my family, friends, and I have tailgated at for the last six years for a game that kicked off at 3:30 p.m. Who would do that? Well evidently me and several thousand more of my closest Georgia brethren considering “our spot” was already taken by someone even crazier than me! Oh the genuine rage I felt as my low beams displayed his silhouette on my very own game day island! That didn’t keep my group down though as we continued with our pregame festivities in the middle of what must have been a monsoon; festivities that included steak, seafood, a houndstooth cake and elephant ears (so we could eat the opposing mascot), and a crimson punch (so we could drink the opposing mascot). Then there was the wretched game where our beloved and favored Bulldogs were supposed to avenge our painful championship game defeat a few years ago only to be shellacked, annihilated, and otherwise dismantled by one of our hated rivals from the West.

A lot of pretty normal people are college football fans, but there is a good portion of that last paragraph that might lead you to believe that I'm a little bonkers. My point is that sports fans often overreact. They react with way more pride and celebration after victories and way more dismay and disgust after losses than they probably should. Many investors do the same thing. Investors can have a good experience with a product or service, and then they suddenly want to buy some stock in the company that made the product or delivered the service based solely on their positive experience. Investors can enjoy some decent growth and gains in a stock they have previously bought a little bit of, and they can develop an insatiable and blind appetite for more and more of that very same (and already appreciated) stock. Investors can get more and more excited about a roaring bull market (think the Dotcom Bubble) and want more and more stock exposure in their portfolios even though the investment return party has been going on quite a while. Of course, investors can also panic more than a Southerner in a snowstorm and completely sell out of a position based on the rampage of some talk show host who is trying to get ratings. A chain email about tax rates going up or a presidential or congressional proposal can also get an investor to sell out of everything just as if they’d seen a mouse, snake, or spider.

The second part about normal investors reacting is actually underreacting. I like to illustrate this by considering Western Union’s lack of interest in Mr. Bell’s telephone patent, IBM’s lack of interest in the Xerox machine, and Kodak’s lack of concern with digital technology. In my own experience, I have found that investors rarely underreact when it comes to their investment portfolios, but instead they underreact when it comes to their own financial trajectory. I stand by that spending all that you are making is not a terribly successful retirement strategy, going into retirement with a large mortgage remaining is not a positive for your retirement cash flow, and that recurring credit card debt is one of the worst things since Brussels sprouts, but not everyone adequately reacts to those messages. Similar to ignoring a scratchy throat a few mornings in a row or that ant you saw in your kitchen the other day, underreacting to financial matters that could be nipped in the bud now can lead to some real serious financial problems in the future.

It’s normal and human to not always react in the optimum way, but financially, it’s important to try to. Maybe it’s all the children’s books I find myself reading now, but I kind of think of Goldilocks. Don’t overreact, don’t underreact, try to react juuuuuust right!