To the Moon and Back, Twice

If that didn’t connect with you, I can also tell you that our national debt could buy 3,824,812,630 Super Bowl tickets, 58,000,000 homes at an average price of a little over $240,000, or all of the country’s 400 largest companies based on market capitalization. If I’m still not breaking through, I ask you to look at the moon tonight and try to fathom that our national debt in $1 bills could reach the moon and back, twice.

Before we decide, let’s briefly consider federal government debt. In simple terms, a government deficit, or debt, arises when the government needs money to pay for a program or project that exceeds tax revenue. The government can address this deficit by increasing tax revenue, printing more money, or by issuing bonds. Increasing tax revenue requires politicians to increase taxes, and that is not always popular. Printing more money is an impractical, short-term fix because, though it allows the government to pay for the program or project, it will devalue the currency and cause inflation, as everyone suddenly has more money. The unpopularity and consequences of the previous options are why most federal governments in the world prefer to issue and sell bonds. By issuing bonds, the government is able to fund its programs and projects with money borrowed from bondholders in return for promising to pay the bondholders back in the future (with a little interest).

If you’ve had your television on in the past decade, you probably know that most nations have government debt. This is because during economic downturns tax revenue falls, and when there are natural disasters, wars, or new entitlement programs, government expenses rise. Theoretically, during times of economic prosperity and peace, there should be government surpluses, and over the long term, government budgets should stay in balance. As you probably know, that has not been the case for the U.S. and many other countries.

For those who firmly believe we should always have a balanced budget, I would ask you to consider why a person is willing to take out a student loan to go to college or why a company is willing to spend substantial amounts on research and development for a new product. Going into debt for the potential of higher earnings or for the potential development of a new or improved product that will yield huge profits is not such a bad idea. Similarly, when the government goes into debt for infrastructure, technology, education, and other programs that promise a better and brighter tomorrow, it is also not a bad idea. It’s those wars, social programs, and other controversial geo-political expenditures that only have an immediate impact with little or no future potential for cultural, social, or financial gain that get governments into fiscal trouble.

Takeaway #1: Our national debt has never been higher. 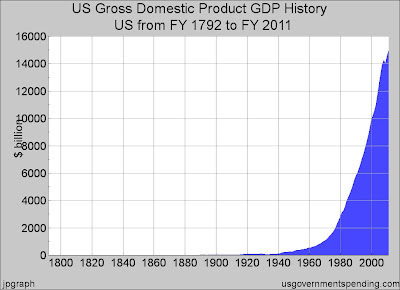 Takeaway #2: Our gross domestic product has never been higher.

How much debt is okay? I don’t know and neither do any of the economists, pundits, or politicians! All I do know is that our country is operating at an unsustainable rate of incurring debt. I believe it is okay to not have a strictly balanced budget as long as the extra spending is used for projects and programs that offer the potential for a future return that exceeds the current expense. I also believe that our policymakers should look to the 1950s as a guide, and they should cut our current spending and increase tax revenues until our GDP is once again growing faster than our national debt. At least then, our debt will become sustainable again. Then, going forward, our policymakers must create and stick to budgets that allow our country to start paying down our national debt principal so that our financial position can stabilize and improve. Similar to how people should never max out their credit if at all possible, our government needs to return to a financial position where it could comfortably sustain additional debt so our nation is ready when the next economic downturn, national security issue, or natural disaster arises.